Each day of this back-to-school week, RFA’s David Lapp highlighted issues in Pennsylvania education policy that he’ll be following closely in the coming year. Click below to read each day: 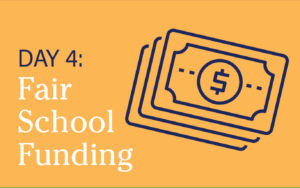 Pennsylvania operates one of the most inequitable school funding systems in the country, one that is particularly biased against students of color. This unfair funding creates large gaps in the educational opportunities available to Black students compared to White students in Pennsylvania schools and between students in poverty and students who are not in poverty. RFA’s Educational Opportunity Dashboard ranks all 50 states on 14 indicators of educational opportunity—including student access to experienced or certified teachers, access to a low student/teacher ratio; or access to schools that offer Calculus, Physics, and Advanced Placement courses; and access to schools with low suspension rates. While troubling race and income disparities in access to educational opportunity exist in most states, the size and pervasiveness of PA’s gaps are among the most severe in the country.

The fact that the most needy students receive the fewest educational opportunities figures to be compelling evidence in the upcoming October trial in Pennsylvania’s landmark school funding lawsuit, led by the Public Interest Law Center and Education Law Center-PA. The lawsuit challenges the Pennsylvania General Assembly’s failure to comply with its state constitutional mandate to “provide for the maintenance and support of a thorough and efficient system of public education to serve the needs of the Commonwealth.” Constitution of the Commonwealth of Pennsylvania Art. III, § 14.

Also relevant will be the use, or failure to fully use, Pennsylvania’s two fair funding formulas to measure district need and distribute state funding. Both the Special Education Funding formula (SEF formula) and Basic Education Funding formula (BEF formula) are coming due for five-year review and recommendations from their respective funding commissions. Despite hearings two years ago, including testimony based on a joint report from RFA and the Education Law Center on how to improve the formula, the SEF Commission has delayed its report several times. Will the SEF Commission finally release a report by their new December 31st deadline? Will a BEF Commission be reconstituted by July as required by the school code?

* Quick aside – Pennsylvania actually has another funding formula––one that policymakers appear to have forgotten about––the original fair funding formula enacted in 2008. Under Governor Corbet, the state abandoned use of the 2008 formula to distribute state funding. But Section 2502.48 of the School Code is still requires the Pennsylvania Department of Education to use that formula to calculate “adequacy targets” for each school district. PDE hasn’t done so since 2010, but Dr. Matthew Gardner Kelly, an expert witness in the fair funding lawsuit used available data to do it for them.

Finally, what will be the status of Level Up funding in next year’s school budget? Both the BEF and SEF formulas are used for only a small portion of state funding, with the majority of state resources distributed without any rational formula, but rather a “hold harmless” approach which drives the school funding inequities. Level Up is an innovative way to use the current BEF formula to more rapidly close those state funding inequities by targeting the 100 poorest and most inequitably funded districts. Last year’s state budget distributed $100 million through Level Up, locking those revenues into the BEF base funding for those districts. But the budget increases were minimal considering the billions in surplus from federal stimulus and improved revenues, much of which the legislature squirreled away into the state’s rainy day fund. Those fighting for fair school funding, such as the PA Schools Work campaign, will likely push the General Assembly to distribute those resources to schools in future budgets and watch closely to be sure they are distributed more fairly than how some CARES Act funds were distributed in 2020.

Increased state funding is so important is because school districts mandated costs (costs required by law such as pensions, charter school tuition payments, and provision of special education) are rising faster than state revenues, forcing districts to either cut programs or increase local property taxes.  As explained by PASBO’s Tim Strom, “[T]he impact of how the state chooses to pay or not pay for a mandated cost clearly matters. Districts that could tax more, did so, and those who could not, still taxed a little more but at lower levels even as they cannibalized programmatic and other areas of the budget. Over the past decade, the commonwealth’s inability to adjust school finance policy even while watching all this unfold, drove educational funding gaps wider and wider.”

One way to provide some relief to districts, would be to enact the charter school funding reforms in H.B. 272 and S.B. 27 which have bipartisan backing and overwhelming support from school boards. These bills would create a flat rate for cyber charter school tuition and fix the flaws of perverse incentives baked into Pennsylvania’s current charter school special education tuition calculation (the “Triple-Whammy” in the current system is demonstrated in RFA’s first episode of PACER TV). Now would be an ideal time to implement such reforms, as the myth that charter schools receive significantly less funding than district schools has been debunked (in studies by both PASBA and the Afton Group) and because cyber charters in particular are receiving massive amounts of federal dollars, without experiencing any revenue loss.