Each day this week I’m highlighting one of the issues in Pennsylvania education policy that I’ll be following closely this year, with some editorializing for good measure.  Click here for Day 1. 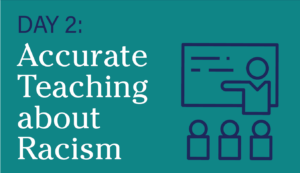 The past year has been fraught with attacks against the 1619 Project and misinformation about critical race theory (CRT) in k-12 schools, presenting CRT as something other than an effort to more accurately understand history and social policy. These attacks feel particularly notable with the recent passing of James Loewen, author of the seminal Lies My Teacher Told Me. Some policymakers apparently want teachers to keep telling those lies.

Legislation has been introduced in several states including Pennsylvania that, as historian Jelani Cobbs explained are “ultimately concerned with an imaginary world in which white people were actually the victims in need of protection from racism.” Several Pennsylvania school districts have issued their own curriculum bans.

This is occurring in a state where 94% of teachers are white and at a time when nearly half of students nationally already have little to no opportunities to discuss racism in the classroom and more than one-third have been taught little or nothing about the history of racism. In some communities, it is students themselves who are pushing back on these bans against learning. Even if these bills or local bans do not find traction, they create a chilling effect on accurate teaching about racism and American history.