The 2015 Every Student Succeeds Act (ESSA) is the major source of federal funding for afterschool programs in the United States, especially through its 21st Century Community Learning Centers program. The law also encourages—and in some cases requires—that applicants for its various funding streams establish that their programs are backed by strong evidence of effectiveness. Under the law, evidence of effectiveness is classified into four progressively more rigorous categories, or “tiers.” The top three tiers provide the most credible evidence, but the fourth tier can justify offering a program if it is also being evaluated.

Afterschool Programs: A Review of Evidence Under the Every Student Succeeds Act reviews research from 2000 to 2017 and finds 128 afterschool programs with research that meets the requirements of ESSA’s top three tiers. Of these, half—64—showed positive impacts on students. The programs, which span grades K-12, are focused on everything from academics to physical fitness to career development. The report concludes with a set of recommendations for program providers, states, program evaluators, and the federal government.

The Afterschool Evidence Guide, a companion to Afterschool Programs, provides detailed, individual descriptions of the afterschool programs with evidence that meets the research requirements of ESSA’s top three tiers. The guide also includes summaries of studies of school-sponsored extracurricular programs, studies that fell short of Tiers I-III but could provide evidence at Tier IV, and studies of programs that combine afterschool and summer learning. 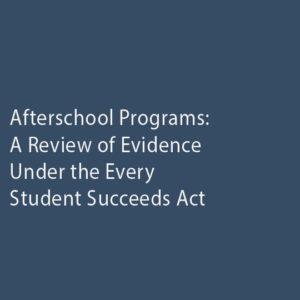